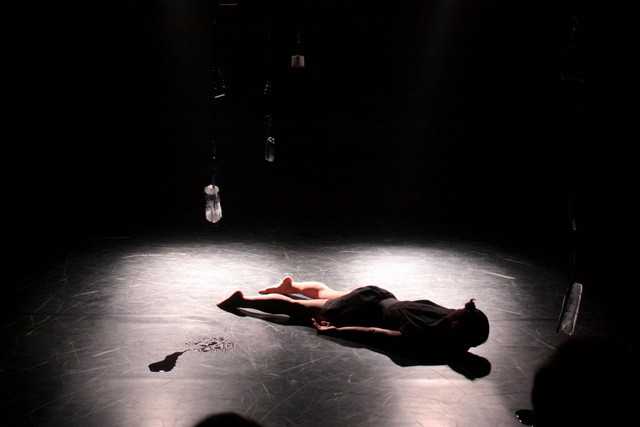 Land (the): a place, part of the earth that is not covered by water, the ground, an area, region and the people who live there.

-ing: the action of the verb or its result, product, material expressing a suffix of nouns formed from verbs , etc. ; [ eng ] a suffix with the meaning of “belonging”, ” the kind of “, ” one came from”.

LANDing begins by running around an incessantly changing core. This core is the set installation, which is made of suspended pairs of plaster and ice blocks that counter-balance each other. The plaster blocks represent the stable structures of a sociocultural environment while the ice blocks, depending on the conditions they are exposed to, thaw in order to change into a new form. They depict the ephemeral condition and the transience of human beings that move forward in order to redefine themselves within an over-demanding contemporary lifestyle.
Through her abrupt and unfinished movements, the performer embodies confusion. She attempts to find a physical and mental balance between the personal needs and the technological and global nomadism that displaced the body into immaterial locations. The cyclic nature of the performance – which starts and ends with the same action – stands for a movement triggered by force of habit: the urgency and need of a departure without a certain destination, is almost a necessity that is caused both by lack of resources and an abundance of offered options. A moment of stillness happens only in the form of falling, where Polyxeni experiences a physical contact to the ground, explores and senses it with the whole potential of the body in order to rediscover its textures and its cultural inheritance.
The wish of adaptation to the speed and efficiency of the digital synapses, pushes the humans to their limits. There is a constant effort to reach a target which is mutating and at the same time shifting further away. The individual experiences disorientation, a kind of schism between different poles. On the one hand, the will of stepping forward free form physical and cultural burden. On the other hand the fermenting conflicts between the past and the present, the existing conditions and the personal perspective. The individual must constantly negotiate with the environment he even – for a short time- occupies, striving for avoiding a sterile impact.

Biographies
Polyxeni Angelidou: 1985, Thessaloniki, Greece. Polyxeni studied architecture (2003- 2010) and dance (2008- 2011) in Greece, where she worked as a dance teacher and performer. Since January 2012, she lives and works in Berlin as Performer, choreographer and set design assistant. Between 2012 – 2014 she studied at the MA Choreography program at HZT with the support of IKY – State Scholarships Foundation of Greece. Polyxeni likes to work interdisciplinary, both in theater spaces as well as for site specific projects and installations. Subjects of her work are the people who live in urban context, the structures and conflicts that emerge from that environment and the way that they affect humans individually, socially, physically or virtually.

Cristina Lelli: 1987, Giulianova, Italy | 2006-2010 Bachelor in architecture at Politecnico di Milano | 2009-2010 Erasmus exchange at the Bauhaus Universität in Weimar | 2012-2014 Master in stage and exhibition design at the Technische Universität Berlin. Since 2012 stage and costume design assistance in Hebbel am Ufer, Radialsystem for Nico and the Navigators; stage and costume designer in Rudolstadt State Theater, Bauhaus Dessau, Uferstudios, UdK and HZT in Berlin. Since then she is passionately working in performing arts on and behind the stage.

Yunpei Wu comes from Taiwan, where he worked for years in music fields. In 2010 he finished his Master “Digital Media” in Lübeck and from 2011 he lives in Berlin, where he presented sound and works in different fields. For the premiere of LANDing in Berlin he composed a sound collage in real time, whose recording is now presented in Italy during the performance.